"Twenty years from now you will be more disappointed by the things you didn't do than by the ones you did do. So throw off the bowlines. Sail away from the safe harbor. Catch the trade winds in your sails. Explore. Dream. Discover." -Mark Twain


Years ago, when it became time to face what I knew would be a long haul with fertility treatment, I froze. It was after two years of trying on our own, a clomid cycle from my gynecologist and then an IUI from RE #1, all without so much as a faint line on a pee stick. After moving back to our home state following these attempts at parenthood, I walked into an appointment with an RE (one who would have been #2) and walked out before the front desk could call my name. As much as I deeply longed for a child, something stopped me in my tracks. Six years later, I'm still not sure I can put a name to it, but it would take another year after that before I would walk through the doors of another fertility clinic.

Money, time, or fear of failure. Perhaps all of the above were the culprits. And yet 6 IUIs, one IVF, one child and six years later, and that pause in my chest still lingers.

For Mr. S, it has been a number of things. I think he had a less than successful sibling experience (and continues to), while I had a less than successful only child experience. I was lonely and now that both of my parents are gone, I virtually have no family outside of my husband and child. My only option is to create one. That loneliness seems to be digging even deeper trenches in me as I face the idea of my mortality and being on the front lines of my family. I am standing here as the last generation, watching the people in my life dwindle and I am questioning what I want from this life. Well, I want more. Call me selfish, but don't call me ungrateful. I cherish what I have so much that I long for it to multiply and according to my personal medical statistics, this next year is likely my only chance to see it happen, if ever.

As I said to Mr. S, "We have our whole lives to make money, but this is our only opportunity to make babies."

But again, Mr. S has been less-than-thrilled with the prospect and as anyone fighting the battle of IF knows, if you both aren't on the same page, you're nowhere.  And that's where I've existed in the space of family building for a long while-in some far off no man's land. I have two frozen embryos that have been in storage for more than three years and a conversation I've been too terrified to begin for fear of its consequences. I hadn't approached Mr. S on the topic in months. I was terrified that I might learn he was done, for good, and doubly terrified that even if he agreed to push forward, it would only be with the frozens and not a fresh and that they would prove unsuccessful and I would squander my very last chance. So, my fear of failure, of the unknown, stunted me from moving forward, perhaps much in the same way it did that day I walked out of that RE's office so many years ago.

In the last few months of my Mom's life, she and I discussed baby names constantly.  It was her hope that she would leave me enough money to pursue treatment. It was my hope that she would live long enough to exhaust that money, but she didn't. So, one of the things that stood in our way was eliminated the day she died. It was her gift, one that I would have given back in a heartbeat for another day with her.

About a month and a half after she passed away, my friend, Sarang, gave me this beautiful necklace in remembrance of my mother: 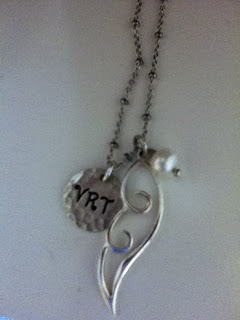 It's my Mom's initials, VRT, a pearl and an angel wing. Lest you think I'm floating way off topic, take a look at this picture of the necklace in the mirror: 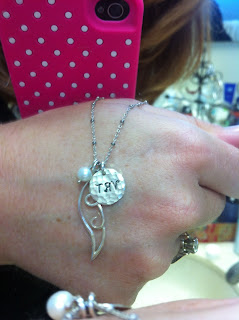 Maybe I'm the only one who sees it, but in the mirror, her initials in this font reflected back spell, "TRY."

Try. It was her whisper to me. When I saw that, I knew. I would no longer sit and be held back simply because of the fear of failure. I have never regretted trying and failing any of my cycles. But if I wait any longer, I will.  I will regret deeply letting the opportunity my Mom worked so hard for slip by because of the same cowardice that prevented me from letting her in on the words I had locked in my heart before she died.  I know firsthand that the pain from regret is much heavier than the pain of having tried and failed, so in that sense, I have some control over my destiny.

A few days after seeing the reflection and building up the courage, I approached Mr. S. It wasn't easy. I had no idea the outcome and was prepared to begin grieving a child who would never be born, as so many of us are faced to do on this journey. After consideration, he agreed we should go forward with our frozens. And so, the wheels have been set in motion once again. This summer I'll climb right back into those stirrups and give it at least one more last shot.

While I might never give birth to another child, I will look back and know that at least I tried, that I didn't let fear stand in my way this time. And that my Mom made this possible and just the opportunity alone is one of the greatest gifts I have ever received.
Posted by Shelby at 1:53 PM 6 comments:

Email ThisBlogThis!Share to TwitterShare to FacebookShare to Pinterest
Newer Posts Older Posts Home
Subscribe to: Posts (Atom)
After years spent wondering whether 'if' would become 'when', here I am...
(finding the 'if' creeping back into my vocabulary.)

Doing our part to educate! Our TV appearances on infertility:

Proud Member of the ALI Community

Shelby
37, hopelessly infertile, married, and by the skin of my teeth (and gobs of medical intervention), a Mom. I'm spending my days hoping lightening strikes a second time that so I can get my grubby little hands on that last title one more time...

The IF Roller Coaster